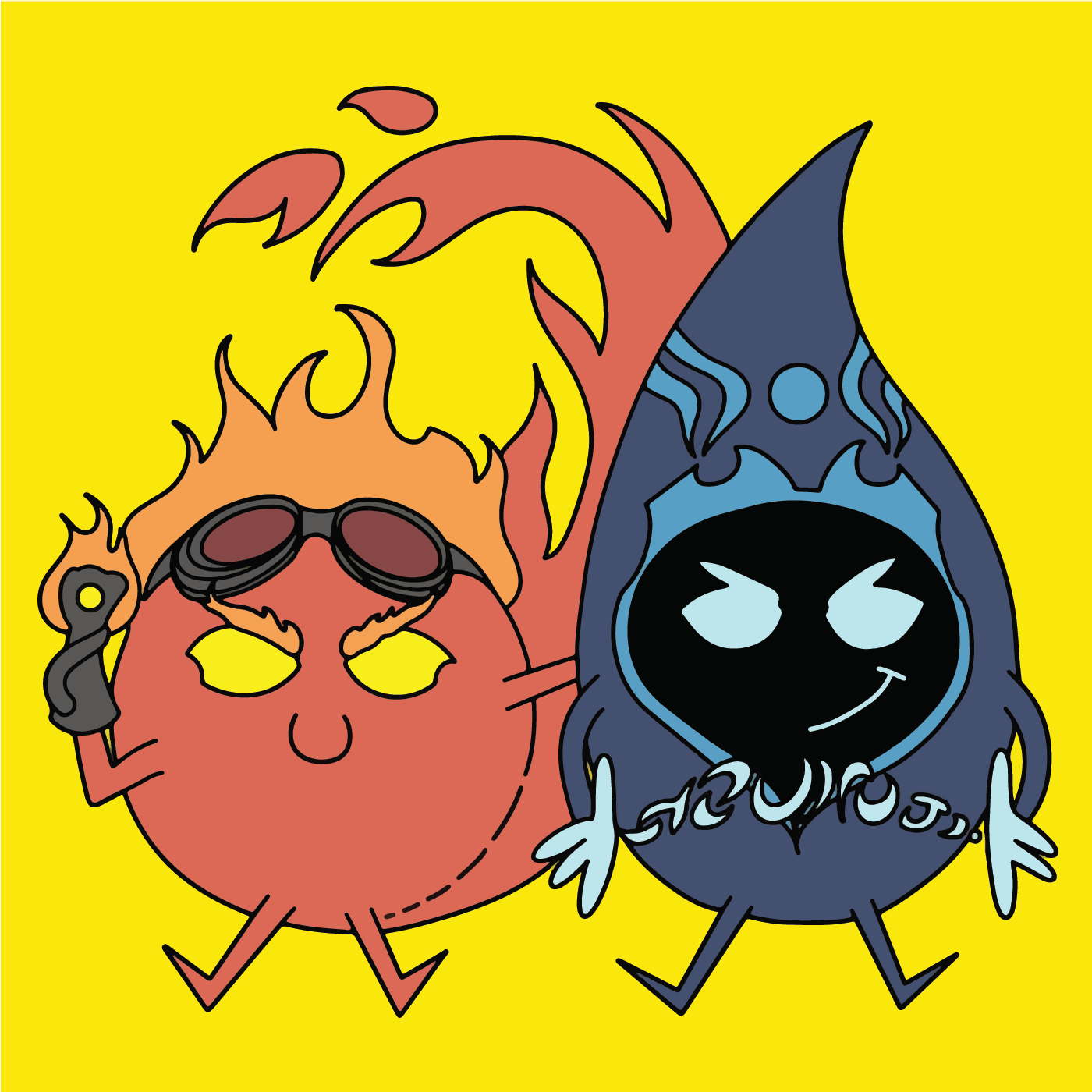 Two mages with diametrically opposed worldviews go head to head, and only one incredibly handsome and articulate one who loves islands will come out ahead. It’s Red Mage Blue Mage time!

It’s a knock-down, drag-out, white-knuckle, club-thumpin, country-bumpkin, punkin-chunkin grudge match between two mages hungry for the crown. Amber is fresh off a cubic victory and she doesn’t plan on giving it back anytime soon. Kenny has plans of his own, though, but does he have what it takes to win what became our longest Combat Phase to date?

Today we’re tackling our first ever fan-submitted topic, one of the most beloved and hated tribes of all time—Slivers! Our journey into the hive mind takes us many places, and we somehow find time to complain about Lovecraft monster design, horror movies, and Changelings. Shout out to @AdeptXander—you gave us a really great topic to discuss!

We touched on Modern Horizons in an Extra Turn (our occasional bonus Friday episodes) right in the midst of spoiler season. But now we want to revisit the topic in a bit more depth. The set has lots of sweet stuff for players of all kinds—Modern players (obvs), but also Commander, Pauper, Cube, and even stinky Goblin aficionados! We’re talking the cards we can’t wait to shell out $30 a pop for!

Echo Roanoke, of @echoroanoke fame, joins us once again, this time talking about all manner of people and critters and existential nightmares that dwell in the margins of our collective and social consciousness. We’re considering two questions today. 1) What cards have the most interesting lore that is never ever explored in any depth? And 2) How is Magic doing at representing the wide range of identities that exist among its players? Join us for one of our favorite discussions.

Energized by her victory in the Cube Draft, Amber once again seizes the reins of her scrap destiny to try to make a clean sweep. Kenny, however, won’t go quietly into that good magic night. He’s pulling out all the stops, leveraging the power of Teferi, Temporal Archmage, in a monoblue superfriends grindfest of a Commander deck. It’s planeswalker vs. planeswalker in this battle royale featuring giant spells from both sides of the table. Monored. Monoblue. Only one will emerge victorious.

Today we are so excited to have our first ever guest on the show—Echo Roanoke! (@echoroanoke)

We’re catching up on a bunch of very-serious-not-serious Magic that all three of us played in the semi-recent past at RollPlus Con, prize tournaments of Planechase Commander and a big Cube Draft. Echo stayed super on brand with their Esper sphinx Commander deck, and god damn if it isn’t nice to have another blue player in the studio :’) After that, we have a lore discussion on one of Echo’s favorite MtG characters, Ashiok, the Nightmare Weaver, and what makes the mystery of Ashiok so compelling.

We’re diving back into the Cube for a Winston Draft, and there’s a lot on the line. Amber’s looking for her first recorded victory, and is willing to dive into unexpected strategies in order to do it. Kenny is sticking to the tried and true, but will his beloved countermagic be enough to save him this time?

Amber and Kenny are both pieces of shit. But they sure have fun! This week they both bring cool and interesting ideas to the table and then proceed to not take it sufficiently seriously for the other’s liking. But that’s also basically the brand? This week we’re talking top fashion icons of Magic as well as a spicy new commander deck from….Kenny???

Modern Horizons spoiler season is out in full force and it’s a whacky, anything-goes, every mechanic but the kitchen sink monstrosity—but is it cool? Yeah, it’s pretty fucking cool. We discuss the power of nostalgia and whether or not Modern Horizons manages to dodge the pitfalls that Time Spiral fell into all those years ago. PLUS! Amber adds another newspaper clipping to her growing Charlie Day conspiracy board.